Welcome back to another Events Space blog post! This week, I had the pleasure of chatting with Holmesglen alum and Events Coordinator at Siemens Healthineers, Adrian Cusmano. During our chat, we reflected on his time studying and his career in events thus far. Before we get started, I just want to say a huge thank you to Adrian for so kindly taking the time out of his day to have a chat, his support and encouragement is greatly appreciated! 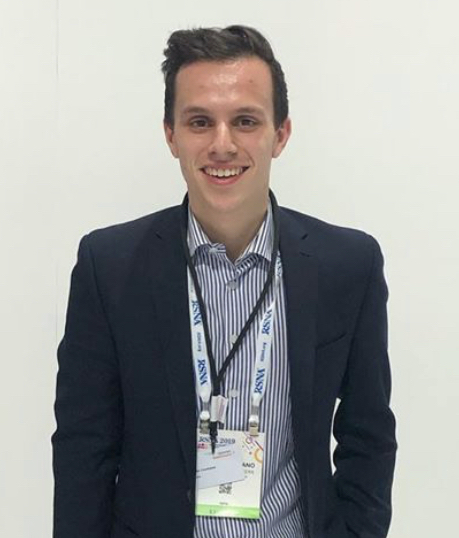 I first asked Adrian how he would describe his journey in 3 words since graduating, and after some thoughtful pauses he replied with ‘challenge, life-changing, and minimal-sleep’. Does that not describe the events industry in a nutshell or what!? Lets journey back through time to where it all started.

A career in events wasn’t Adrian’s OG plan. In fact, he was studying Film and TV, while working as a puppy school teacher when he was approached by his manager to start running events for the business. In hindsight, Adrian reflected that not pursuing a career in events earlier than he did was crazy, considering he had planned the Performing Arts Festival, among other events, when he was in high school. Once he heard event management calling his name, he wasted no time, enrolling in the Diploma at Holmesglen and embarking on that yellow brick road to a career in events.

Adrian spoke so fondly of his time here at Holmesglen and the friendships and connections he made with not only his classmates but teachers and the industry professionals he met during his internships. Adrian’s first taste of events was during his studies working in the role of Mass Cast Movement at the Victorian State School Spectacular (VSSS). When asked how he would describe working at VSSS, he replied ‘[it was] such a fun experience! It felt like a bunch of friends hanging out...but we also got to experience the live production side of events too’. Adrian met Simon while working on VSSS, who later offered him an opportunity to work at White Night shortly after.

Adrian graduated in June 2018, later gaining employment with Siemens Healthineers to be apart of a team that in a normal year, produces 150 events annually! Adrian’s role has seen him travel to Germany and America for work, but when asked to recall his most memorable event, he spoke of an experience that was a little closer to home, in Adelaide to be exact. The SMRT conference for radiologists proved to be a little exceptional. Adrian explained this event had himself and his colleague running around on zero sleep, to transport all the equipment and materials from the convention center to the networking venue within a 1-hour window. Ultimately that meant a lot of Ubers and even more coffee...Welcome to the reality of events kids!

Although the event industry seems glamorous and fun (which, let’s be real it totally can be!) there’s also a plethora of challenges and sometimes bad days. I asked Adrian what has been the hardest lesson he’s had to learn on the job, this is what he had to say,

‘Lean on your team. One of the things I struggled with was being afraid of failing and not wanting to do a bad job. That was a big challenge...we [Adrian and his manager] have those conversations where I tell her “if I mess up, I want you to tell me”, and that’s the relationship I have with her now, but at the start, it was a big challenge of not knowing what to do and not knowing the company...so being afraid to mess up was one of the biggest challenges I’ve overcome.’

Adrian continued by expressed his appreciation towards his manager for her unwavering support, and for teaching him to always reach out if you're struggling. An appropriate sentiment not only in one’s career but also in life.

On that note, there has never been a better time for us students to reach out to our teachers, other students, and industry professionals to seek advice and start creating connections. The nature of the event industry is networking, and while Miss Rona has overstayed her welcome in Victoria, and made physically networking a whole lot harder, Adrian encourages current and prospective students to ‘push yourself...if you don’t try, you’ll never know.’

Adrian exemplified his networking abilities while he was interning. It’s as simple as having a chat and being friendly, people will remember you for making that effort to connect.

‘Network as much as possible, virtually or physically. Even in industry, I don’t

stop networking with suppliers to make sure we get the best deal...it’s super important to

always keep networking. What have you got to lose?’

As we’ve now come to the end, I’ll leave you with Adrian’s parting advice.

‘Don’t lose hope, because coming from someone who works in the industry and seeing

it be revived in parts of the world and around the country is a positive sign...Listen to

your teachers, it’s vital to your success, and never stop networking.’

Thank you again to Adrian for imparting his knowledge and sharing his experiences with us!

Leave a comment below and let me hear your thoughts!